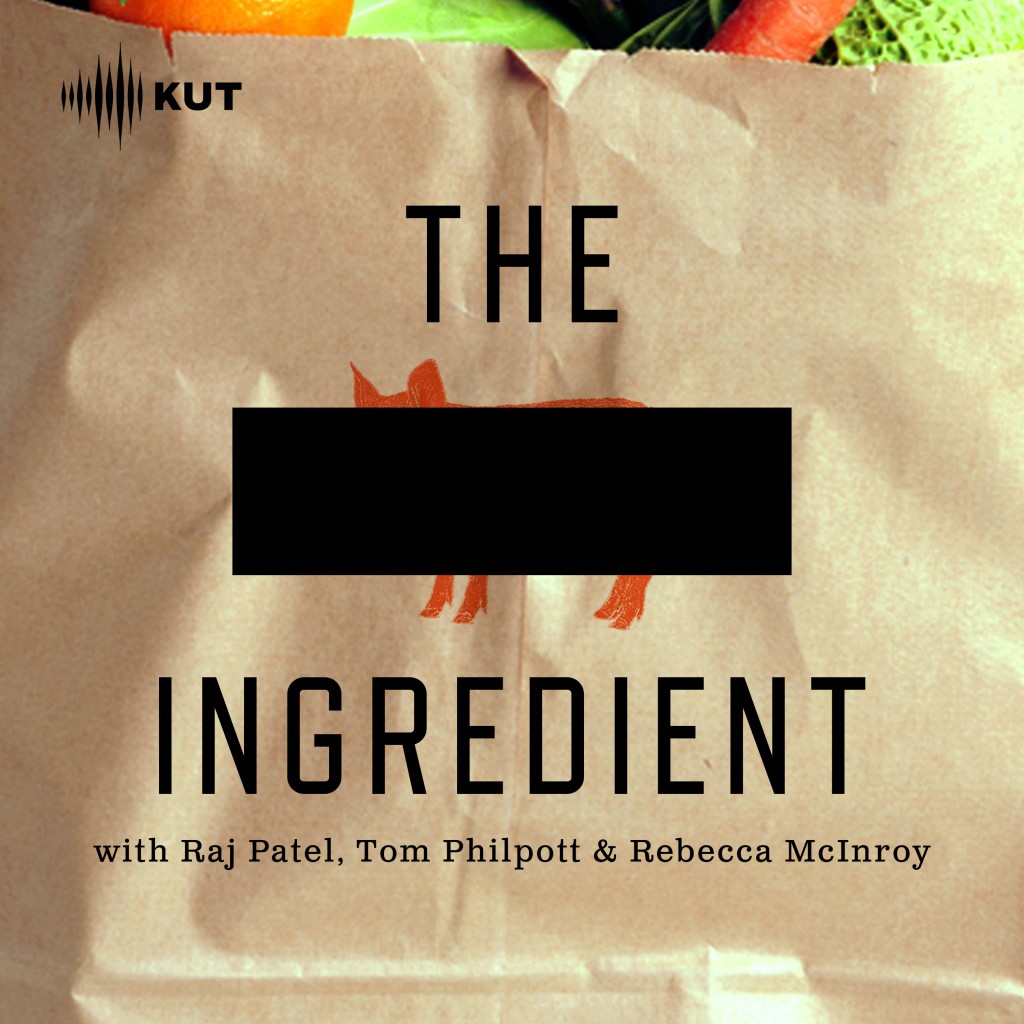 AUSTIN, TX. – Feb. 23, 2015 – A new podcast finds the big picture on small plates. Veteran food-politics writers Raj Patel and Tom Philpott have teamed with Rebecca McInroy, a seasoned producer at KUT, Austin’s NPR affiliate, to launch The Secret Ingredient, a bi-weekly podcast that “won’t tell you what to eat, but will explore why you’re eating it.”

In each episode, the hosts interview a guest who’s deeply versed in a particular foodstuff or aspect of food production or consumption. Rather than ask how to prepare it or what wine it goes well with, the hosts probe its history, and how it has made the world we live in. The show covers the hidden life of food—the “secret ingredient” of the title. “Turns out the real secret ingredients are often capitalism, colonialism, and death,” says Patel, a professor at the University of Texas LBJ School of Public Affairs and New York Times Bestselling author of Stuffed and Starved and the Value of Nothing.

“For something that’s such an intimate part of life, food is easy to take for granted for many people in the United States,” adds Philpott, an award-winning journalist, currently food and agriculture correspondent for Mother Jones magazine. “Yet everything we eat has a particular and fascinating backstory. How it gets to the supermarket shelf involves a twisted tale of social power, cultural history, and ecological circumstance. That’s really what gets the Secret Ingredient podcast cooking.”

“I’m excited to be a part of this project because our relationship with food is such an intimate part of who we are, yet we struggle to talk about it in any way more sophisticated than the kinds of food we like,” says McInroy. “It’s through reconnecting with the histories, economics and the mythologies, of food, that we can better understand our world, and ourselves.”

Nestle, author of the seminal book Food Politics and most recently Soda Politics: Taking on Big Soda (and Winning), is a regular listener ““Here are the voices of people who care deeply about the health of people and the planet and are doing everything they can to create a better and more democratic food system,” she says. “Listen to them and take action!”

The podcast can be found on Itunes, Soundcloud, NPROne and Stitcher.

About Raj Patel: Raj Patel is an award-winning writer, activist and academic. He is a Research Professor in the Lyndon B Johnson School of Public Affairs at the University of Texas, Austin and a Senior Research Associate at the Unit for the Humanities at the university currently known as Rhodes University (UHURU), South Africa. He has degrees from the University of Oxford, the London School of Economics and Cornell University, has worked for the World Bank and WTO, and protested against them around the world. His is the author of Stuffed and Starved: The Hidden Battle for the World Food System and The Value of Nothing, a New York Times best-seller. He is currently working on a ground-breaking documentary project about the global food system with award-winning director Steve James. He’s also completing a book on world ecology with Jason W Moore for the University of California Press entitled “Seven Cheap Things”.

About Tom Philpott: Food and agriculture correspondent  for Mother Jones magazine, Philpott maintains the Food for Thought blog and writes features and columns. He is the recipient of the 2015 Gerald Loeb Award for Distinguished Business and Financial Journalism for best feature, and the 2014 “Best Food Blog” by the Association of Food Journalists. In 2011, Utne Reader named him one of “25 Visionaries Who Are Changing Your World,” and in 2008, Food & Wine named Philpott one of “ten innovators” who “will continue to shape the culinary consciousness of our country for the next 30 years.” He has worked as a restaurant critic at The Austin Chronicle, a writing and math tutor and teacher at Austin Community College, and a grill cook at the Nighthawk Steakhouse, an Austin institution until its closure in the 1990s.

About Rebecca McInroy: Host and executive producer who produces a wide range of content for KUT, KUTX and KUT.ORG. Rebecca believes it is important that Public Radio directly connects with the community it serves.  Many of her programs combine the talent, and knowledge of the Austin community, with the production arm of KUT/KUTX Radio to produce content that bridges the gaps that lie between the world of news and entertainment, and illuminates the vast dimensions of the human experience. McInroy is the co-creator, host, and executive producer for Views and Brews, Two Guys on Your Head, Liner Notes, and The Write Up with Owen Egerton.