I’m a little disappointed with The Observer today. I’d been holding back on posting all my thoughts about food riots so that I could pull them out of the hat today with a comment piece in their pages. My article began with worries about globalisation and the consequences of food riots in Haiti.

The piece was bumped yesterday afternoon.

Yesterday evening it was announced that the Haitian Prime Minister, Jacques Edouard Alexis, had been fired in a special session of the Haitian Senate because of the food riots. 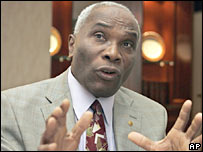 Since I’m still hoping that the piece will still appear somewhere, and since it now needs rewriting, I’ll not post it quite yet. But here’s what the stories of the price rises leave out, and why there’s reason to fear that Haiti’s fate is likely to be that of many other countries.

Last week, four people died in food protests in Haiti. In response, Haiti’s President Préval told his fellow Haitians that ‘the solution is not to go around destroying stores. I’m giving you orders to stop.’ It’s a response that reveals quite how impotent Préval is in the face of the rising food prices. Like King Canute, his attempts to turn the tide were less than successful. But despite announcements of price freezes, the ouster of Alexis happened because it was one of the very few things the Senate could do.

So why is Haiti (like the many other countries around the world experiencing food riots) in the mess it’s in?

To some extent, Haiti is exceptional. It has been subject to a long history of intervention, ever since its glorious rebellion, the first uprising of slaves against their masters, over 200 years ago. Since then, European and recently North American powers have taken turns to punish Haitians, beating the living daylights out of the country. Noam Chomsky has written about this rather well as has Naomi Klein.

Part of the more recent intervention came under Reagan and Clinton. When a group of US-funded guerillas deposed Jean Bertrand Aristide, Clinton imposed some harsh trade liberalization conditions as the price Aristide would have to pay to get back into power. It’s this gunboat diplomacy that, Aristide says, tied his hands behind his back in terms of fiscal policy.

Aristide was subsequently deposed when he tried to untie his hands – the current Bush administration bankrolled a coup against him, and only guaranteed his life if he left immediately.

That history is one that is erased. The fact that Haiti produced more rice in 1984 than it does now isn’t an accident. The fact that the bags of rice to be found in Haiti have US flags stamped on them is no accident. As former secretary of state for Agriculture, Earl Butz, put it: ‘Hungry men listen only to those who have a piece of bread. Food is a tool. It is a weapon in the US negotiating kit.’

And that’s also one of the ironies behind the complaints of institutions like the IMF and World Bank. At the same time as they bemoan the food crisis, they are its architects. They have aggressively prohibited the kinds of policy that might have mitigated the price shock. No grain reserves. No support for domestic agriculture. No tariff barriers. All so that weapon in the US toolkit could be honed a little sharper.

It’s not just Aristide whose hands were tied behind his back. Préval’s are too. For all his bluster, Préval can only sit and wait. Although he promises change and support, the imposition of farm subsidies and tariffs is, strictly speaking, illegal. He has treatied away his right to do anything but rage against the tide, and occasionally flick out a cabinet member.

These are also the options open to almost every government in the Global South that wants to do something to tackle the food crisis. The policies that could help have been prohibited by the international financial institutions. They have the options of rearranging the deck chairs, but they’ve already hit the iceberg.