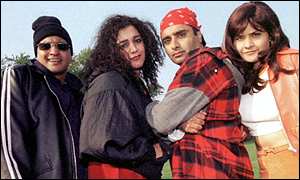 There’s a Steve Martin line: ‘some people have a way with words, and other people … no have way’. When it comes to speeches, I no have way, so at the Stuffed and Starved book launch on Thursday, I jotted down these few notes. I’m posting them up here for the twin reasons that they make a sound point about race and food in Britain, and that it’d make my parents happy.

The dedication in this book reads “to the everyday heroes and heroines”. It’s a small gesture to the people, some of whom I interviewed for this book, in Brazil, India, South Africa, South Korea, Italy and the US and elsewhere, who through their work, make the world better, make us more attuned to our senses, more connected to one another, and make our lives richer.

It took hundreds of people to put this book together (and the lengthy acknowledgments section carries their names). But I’d particularly like to thank the wonderful people at ICM and Portobello who supported this book through it all, especially Karolina Sutton – who has interrupted her holiday to be here this evening, together with Kate Jones, and the rest of the ICM staff, who have turned out in force, and at Portobello Books, I’d particularly like to thank Laura Barber, Philip Gwyn Jones, Hannah Marshall, and Tasja Dorkofikis. And I want to recognise that none of this would have happened had Palash Davé not encouraged me and introduced me to Kate and Karolina. Without them, no book.

But if it’s appropriate to thank Palash, and it is, then it’d also be appropriate to recognise two other people without whom this book would never have happened, and I don’t mention them by name in the book – my parents, Charles and Pratima Patel.

Tonight is quite special for many of the Patels here tonight. With a name like that, and particularly with a name like mine, you’re heir to a fair share of anonymity. I once went to a party where there were a dozen different Raj Patels of one kind or another. Even after I sobered up, there were still a few around.

Growing up in Britain with a name like Patel means you are heir to other things. And part of the baggage that comes with a name like Patel is the association with cornershops and newsagents. In my case, it’s entirely accurate. I grew up in a cornershop. In fact this I something of a homecoming. I grew up in the stockroom of one not very far from here, surrounded by fags, mags and sweets.

My parents story is almost a cliché – they came to the country with six pounds, started working for themselves at a newsagent shop less than a mile from here, in Paddington, and managed through their success in business to bring other family members over.

My parents went through unbelieveable hardships, most of which I’ve been ungrateful for, scrimping and saving, and making sure that my brother and I never wanted for anything.

My earliest memories are of a blissful time, in the stockroom playing in the basement with my brother, Sanjeev, who’s here today with his wife Ramona, listening to the soft click of heels as people walked on the shopfloor above us – that was our lullaby, surrounded by crap food.

And that only a mile away from here. But it’s a million miles away too – I don’t think any of us would have imagined that it’d be possible for us to move from that dusty stockroom to a bookshop in Holland Park.

The irony for us is, of course, that the very things that paid the bills, that made it possible for me to get into a place where I could write this book, cigarettes and snacks, are killing us.

In Britain, Patels are also heir to are diabetes and heart disease.

While the background level of diabetes in the white British population is 4%, in the British South Asian community, it’s nearer twenty percent – five times more. Heart disease rates are also through the roof– and we’ve lost too many to the kinds of disease that we might have avoided.

My favourite thing to swipe from the shelves when I was a kid in a candy store, were a certain kind of white mints in plastic wrap tubes, called Mint Imperials. But the imperial diet, of sugar and fats and salts, isn’t good for us.

But I suppose that’s a contradiction of capitalism – that a book about the dangers of modern diet was made possible through the sale of a dangerous modern diet.

There’s a flip side to the increased rates of diabetes, heart disease and obesity in the South Asian community. And that is that immigrant communities in Britain are also more systematically likely to have a child going to bed hungry than white families. And the national average is bad enough – 1 in 4 children live in poverty in this country.

While this book is about the world’s 1 billion overweight, and 800 million hungry, you don’t have to go to the third world to find it. It’s happening right here.

In many ways, then, British Asians are canaries in the mineshaft for the rest of Britain. But one of the things that surprised me when I was writing this book is that worries about this have been sounded for a long time. I found a quote from a commentator and evangelical vegetarian, writing in London, man by the name of George Cheyne, who wrote

“Since our Wealth has increasíd, we have ransackíd all the parts of the Globe to bring together its whole Stock of Materials for Riot, Luxury, and to provoke Excess. Is it any Wonder,then, that the Diseases which proceed from Idleness and Fulness of Bread, should increase in Proportion … with the Matter and Cause of Disease?”

And he wrote that in 1733. This he termed obesity the ‘English Malady’. Today, it’s the world’s malady, and it’s hitting us all.

So where does that leave us? Well, it means we have to distrust our instincts. Instead, we need to understand how our instincts have been captured by the food industry, and how we might, through a political engagement with our food, connect with it in new ways. If this sounds like hard work, it is – but it’s also rewarding.

One of the things that came as a surprise from writing this book is appreciating how pleasurable that can be. In a sense, it’s to be expected – you’ve heard of the story about how kids who are fed identical meals enjoy them more if they come in McDonald’s wrappers. Well, a similar thing is possible with food that’s seasonal, local, and ethically grown. As some of you from my schooldays here will observe, I enjoy food now at least four stone more than I used to. I don’t think I’ve ever appreciated food more, at the same time as doing politics. And it’s something that we can all do.

The future needs more everyday heroism, and we’re well equipped to be heroic. Part of that means understanding how we got here, that we know what to change. And I can’t think of a better example than the way I’ve been shown by my mum and dad – I know you’re proud of me tonight, but tonight I couldn’t be prouder of you.