The British Food Standards Agency (FSA) have come out with some useful research on the nation’s health, and food poverty. The message from the media seems to be this: ‘the poor don’t have it as bad as we thought’.

To some extent this is a welcome message – it goes some way to countering the national sport, as British as cricket, of heaping contempt on poor people (though I suspect that it’ll take a little more than this report to make the practice disappear completely). 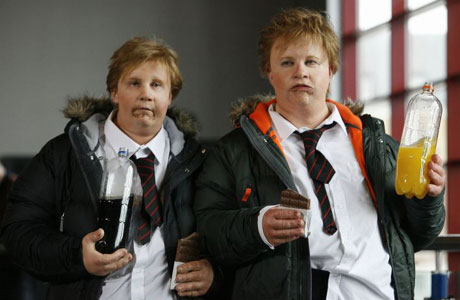 It turns out that everyone eats almost as badly in Britain. But the ‘almost’ is where the important stuff is. And herein lies a puzzle.

From the media coverage, I worried that I’d not been reading the same report. There’s a world of a difference between the ‘everything’s just fine’ report from, say, the Times, and the disturbing story coming from the FSA. It could be, however, that Fleet Street’s Finest haven’t quite read the document about which they write. As unpalatable as this might be, I worry that it might be true.

Here’s what the Times is saying, under the title Poor ‘eating just as well as the rest’

…the £5m study by the Food Standards Agency (FSA) – which looked at the eating habits of 3,500 people – found the nutritional value of the food eaten by the poorest 15% in society was little different from the average. The study also found the rate of obesity, which has often been linked to poverty, was at a similar level among the poor as it is in the general population….

In the report, which you can download here, you’ll read that

On the other hand, there was increased consumption of the following foods over seven days (low income vs general population)

This isn’t, by any stretch of the imagination, a case of the poor eating ‘just as badly’. What’s more, as the report points out, people of colour (‘non-whites’ in the enlightened language of the report), and women are disproportionately represented in the sample of the Queen’s poorer subjects. This, again, passes without comment, it being the entirely unremarkable and unalterable state of affairs in the UK.

Reports about obesity levels among the poor and rich also dot the media coverage. Which is odd – in the final report, the chapter that covers the obesity data, Chapter 12, has been omitted in an apparent printing error. Although the obesity data appears in the report’s executive summary, there’s too little data there to make any serious analysis about comparative levels of obesity between the general population and those on low income. This hasn’t, of course, prevented such comparisons being made.

And while there’s much that the report doesn’t say which has, nonetheless, made it into the media, the press is silent on the report’s many interesting factoids. The government is able to confirm, for instance, that men in the North of England consume more pies than their brothers in the South.

There are findings in the report that have been used in self defence by the food industry. The Times bravely asks Kevin Hawkins, director-general of the British Retail Consortium, what he thinks of the report. Hawkins replies

This confirms that British retailers have made healthy food accessible to families of all incomes.

And he’s right. Sort of. The report shows that women with access to large supermarkets eat more fresh fruit and vegetables than those who don’t:

The most notable difference was for women in households that shopped at a large supermarket, who consumed significantly more fruit and more vegetables than other women (fruit 71g vs. 61g, vegetables 105g vs. 89g).

But the question, as with all studies of this kind, is this: what’s the counterfactual? What is it that’s being compared with the existing state of affairs. By choosing the comparison point, after all, you can often choose the outcome of the comparison. And the supermarket claim compares the presence with the absence of supermarkets. This isn’t the right counterfactual at all. Two others present themselves. One might want to compare not supermarkets with food deserts, helpfully defined here by a British Medical Journal article, but comparing supermarkets with vibrant farmers markets, as The New Economics Foundation have done.

Or, better yet, one might want to observe that the FSA report itself contains a far more powerful way for poor people to access healthy food than going to the supermarket.

Access and a connection to food systems is an important part of a healthy diet, it would seem. Indeed, it’s a far stronger factor in healthy eating than supermarket access. But it’s one that’s far from the menu of policy choices offered up to the British public through its press.