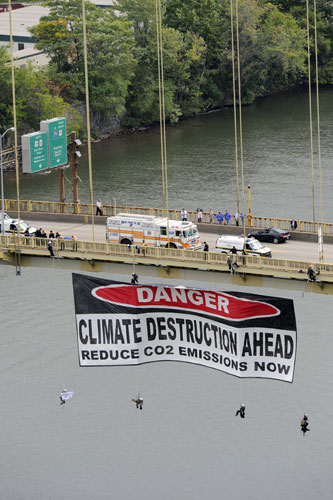 But front and centre in the teach-ins, media, and protesting that I’ve seen so far have been people from Pittsburgh. The churches (of which there are many in the impoverished parts of town), unions, and local action groups have come together, hammered out some principles of collaboration and action, and are protesting everything from Obama’s failed promises on AIDS to the city’s chronic homelessness.

Looks pretty concrete to me. And very clearly articulated to the failures of capitalism. I don’t know a single community organiser who doesn’t think that their local issues are intimately bound up with ‘abstractions’ like class, empire and patriarchy.

I’m off now to see how protest and dissent is tolerated in Obama’s America – more from me soon.