The excellent Mindi Schneider, friend and comrade, sent me this missive from her base in China. Since Mindi doesn’t yet have a blog of her own, I only seemed right to share her thoughtful analysis here. I know she’s knee deep in translations at the moment, but I’m hoping that if y’all comment, Mindi’ll be able to join the discussion. So, without further ado: 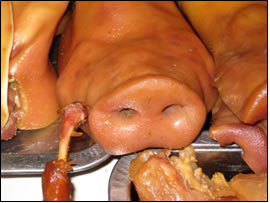 If I could, I would eat that pig snout…notes from a reluctant vegetarian in Chengdu on going whole hog

True confessions.  I’m a student of food and agriculture politics and sustainability.  I currently live in China.  I study the pig industry.  And I’m a vegetarian.

My reluctance as a vegetarian is the result of a long and complicated relationship with meat.   It all started with a visit to Carlson & Dref’s Butcher shop in my hometown of Blair, Nebraska (It has since gone out of business, which tells another story of food system change altogether).  I was 10 or 11, and I went with my mom to pick up some lunch meats.  On that fateful day, the door to the meat locker was slightly ajar, and I was horrified to see an entire skinned cow hanging from a hook, footless, tailless, and bloody.  From that moment, I was done with meat.  Even before then, I remember not liking the taste of a most meats, and I was a stubborn child.  I spent several nights alone at the dinner table after being told, “you will not get up from this table until you clear you plate” (I always won this standoff though, strong-willed from the get go), and irritating my family at holidays by proclaiming that “the roast beef is green, and I will not eat it” (I reasoned that since cows ate grass, it made perfect sense that the meat would be grass stained).  Until standing in the shadow of that enormous carcass, however, my aversion to all things meaty hadn’t come together as a label. But right then and there, I became a vegetarian.

I was never a real animal lover, didn’t much care for pets, didn’t like petting cats, etc.  So seeing the skinned cow wasn’t a “poor Elsie” kind of emotion.  It was more an “oh yuck, look at all of that flesh!”  Today, I’m 34, and aside from a few diversions, my lips haven’t met a piece of meat in over 20 years.  I wish it were different. Life both in the States and in China would be so much easier, and I would like nothing more than to be a fearless, Anthony Bourdain-style opportunivore.  My options at dinnertime would increase exponentially, I could stop fielding so many questions from Chinese restaurant workers, I could order “Old Nominal Mother Stir Fried Kidneys” or “The Incense Burns the Cosmetology Hoof”. With the encouragement of a few swine-loving friends, I’ve been trying to turn the beat around and see if I can join the carnivorous among us.  In the past few years, I’ve had a bit of bacon, a slice or two of pepperoni pizza, and even nibbled on a buffalo burger.  Mostly though, I borrow a small piece of meat from a friend’s dinner, plop it down on my plate, and then just stare at it, unable to raise the fork (or chopstick) to my mouth. It’s that fleshy thing again.  I just can’t imagine chewing on flesh!

I’ve had other reasons too.  In college, my vegetarianism became militant.  I wrote papers in philosophy classes about “the immorality of eating meat” using Kant’s categorical imperative to argue that since it is impossible for every person on the planet to eat meat on a daily basis (because of limited land and resources), then it is immoral for anyone to do so.  I gave speeches about hamburgers and the destruction of rainforests in South America.  When I visited home, I would “mooo” and “oink” at my family members as they bit into beef patties and hams.  I was obnoxious.  I was “one of those” vegetarians.

Then I mellowed, and realized that people weren’t going to want to eat dinner with me if I continually tried to shame the carnivores into submission.  I also realized that no one felt shame; they just felt that I was annoying.  I never forgot my politics, but I cooled down, went on with my business, even worked as a server at a steak house for a while, and later fell in love with livestock in a new and unexpected way.

I hope that my various relationships to eating meat have helped me understand meat politics in a more nuanced manner. In my more confrontational years in the 1990s, I would have agreed with the more radical calls for worldwide vegetarianism on ecological grounds.  I thought that if humanity just stopped eating meat, then the majority of our pressing environmental challenges could be overcome.  I could link meat production and consumption to just about every ecological ailment going.  But then I started studying agroecology, and then development sociology and political economy, and today I whole-heartedly disagree with this idea.  In the simplest terms, here’s why:  food systems need animals.  To think about agricultural sustainability without animals is nonsense.  In the most sustainable and agroecologically designed farming systems, animals convert scraps and weeds into nutrient-rich fertilizer, they till the soil, and they help manage weed and insect pests. In many places, livestock are centrally important to the most vulnerable populations of farmers, as they provide a necessary source of protein and/or dairy products, and act as living banks that can be sold when the kids need to pay school fees, etc.  Livestock are key farming system components that function ecologically, socially, nutritionally, and even politically.

Which brings me to the next point.  We can’t vilify livestock and meat uncategorically.  For example, the recent reports linking livestock production to climate change are serious[1], and we need to take heed.  Surely, industrial agriculture is a key CO2 contributor, both in terms of emissions associated with production and with long distance trade in grain and other food products.  (Just as surely as industrial agriculture is a more general disaster for communities, soil, water, human health, etc., and just as surely as meat consumption in the world’s most marketized countries is outrageously and unsustainably high.)  But critics of these reports and responses to them also have a valid critique when they say shifting to more vegetarianism would be a disaster for poor farmers[2] On this, they have a point.  Leave aside for the time being that these claims are mostly being levied by the agbiz elite, who could care less about “poor farmers in Africa” unless those farmers can help them make a buck.  My point is that we have to think about different forms of livestock and meat production, instead of treating meat as a monolith.  Pastoralists and small-scale farmers are not contributing to climate change, and in fact, their practices are precisely what we need to combat it.  And they raise and (typically) eat animals!

We need more nuanced debates, period.  The black/white, left/right dualism that defines most politics today won’t get us anywhere, not least because the debates are incomplete.  One of the only things that is black and white is that some people in the world are poor and hungry, and some people aren’t (and some are overfed to boot).  When we talk about the role of meat in defining and addressing this issue, we must consider different practices, localities, and cultures.  Let’s treat vegetarianism as one of a whole range of ways of eating, practiced for a whole range of reasons from religious beliefs to personal aversions to flesh, and not propose it as some kind of universalizing saving grace.  That just descends quickly into elitism.  Let’s also remember that in some places, because of climate and geomorphology, vegetarianism is highly unsustainable and even impossible.  Instead, we need to think about how meat is produced, who produces it, who eats it, who sells it, who buys it, who governs it, how far it travels from farm to fork or chopstick to sewer, and what role it plays in politics, society, and agroecosystems.

I’m writing about this today because I went shopping at a local market in Chengdu and feasted my eyes on stall after stall of animals and animal parts hanging from hooks.  Just like when I was 10, I still don’t want to order up a whole duck, or a pig’s tail, or chicken intestines to take home, but I’m so grateful to the people who do.  That this is how hundreds of millions of Chinese people (and people in other places as well) are accustomed to buying meat is a wonderful thing.  The meat is freshly slaughtered, comes from nearby farms, and isn’t served up on styrofoam trays encased in plastic wrap.  People know what they’re looking for and know how to make every part of the animal into (what I imagine is) a delicious dish.

I’ve been on a new, and I’m sure my friends would say, a somewhat obnoxious campaign lately, that if people are going to eat meat they should be ready to the whole animal. Meat is meat, right? We shouldn’t discriminate. This is not a new idea by any means – my dad grew up on a farm and ate cow tongue, head cheese, and all kinds of sorted and a sundry body parts all the time. But this is another way we need to think about meat politics and sustainability today. Consider this, each year the US exports more than 100,000MT of pig offal (entrails, organs, feet, etc.) to China. Agbiz see this as a rational marketing maneuver since Americans only want to eat “prime cuts” and Chinese people like to eat lungs and stomachs. For the corporations, they get to profit at both ends of the dismembered pigs. But for the rest of us, I’m not sure on what planet it makes rational sense to ship body parts half way around the world, especially in a time of peak oil and peak soil, and all kinds of peaks. This certainly is not one of the sustainable solutions we need.

I implore you, carnivores, step away from the neatly packaged, hormone-laden, breast-o’-caged-and-flightless-chicken, and instead try a pig ear or a chicken head from your local farmer.  And vegetarians, let’s support our flesh-eating brethren in searching out more sustainable ways to eat their meat, and I don’t mean by choosing expensive haute cuisine served at restaurants that only a few of us can afford.  I want the kind of change that everyone can participate in.  On this, we have a lot to learn from the Chinese people who make daily trips to the market to buy fresh produce and meat.  One of the most important is learning how to go whole hog and waste not even a snout!