The Coalition of Immokalee Workers today launch a new phase of their struggle, by taking on some of the country’s largest supermarkets. To help, they’ve produced a splendid two minute video. It’s worth a watch, not least because twenty seconds in, the campaign video has a cracking dissolve, taking us from supermarket aisle to tomato field in a handful of frames. It’s  a leap that most of us still find hard to comprehend. Perhaps seeing it makes it easier both to believe, and to remember. Check out the actions below, and save the dates. 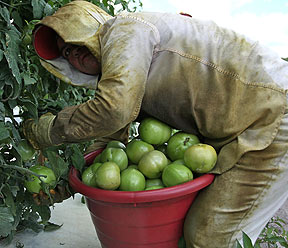 Publix, Ahold, Kroger and Trader Joe’s all pack a very heavy punch when it comes to their market power in the produce industry. And with great power comes great responsibility — both for the poverty and brutal working conditions from which they have profited for so many years, and for the work of reforming farm labor conditions in their supply chains that lies ahead.

With the four largest fast-food companies (McDonald’s, Yum Brands, Burger King, and Subway) and three largest foodservice providers (Compass Group, Aramark, and Sodexo) having signed Fair Food agreements with the CIW, the focus now falls squarely on the $550 billion supermarket industry. And with the exception ofWhole Foods, the natural food leader that signed an agreement with the CIW nearly two years ago, it’s time now for the major grocery chains to step up and bring their considerable purchasing power to the plate.

If we are to end Florida’s decades-old Harvest of Shame, the supermarket giants must do their part. And for that to happen, the Campaign for Fair Food needs YOU to take action.

During the first several years of the Campaign for Fair Food, we focused our efforts on the fast-food industry. Then, last year, the campaign turned to the foodservice industry, and won agreements with the three largest companies in that sector.

This year, let’s end this struggle. The supermarket giants are the only thing standing between us and a future of respect for human rights in Florida’s fields, between a food industry based on farm labor exploitation and degradation today and a more modern, more humane industry tomorrow.

Let’s send them a message — loud and clear — that it’s time for the supermarket industry to join the growing movement for Fair Food.

2 Replies to “One Penny More”